Skip to content
← The Broken Archive
Amina Zoubir: Archaeology of The Colonized Body

Amina Zoubir is an Algerian visual artist and videomaker who works on the notion of the body and its interactions in public spaces to question and analyse social and historical thoughts in North Africa. Through her installations and performances, she makes reference to the behavioral transfer of the individuals’ unconscious when they evolve in predetermined spaces by socio-political norms and cultural codifications, while her intention seeks to create a distortion in order to thwart the established order. Through her poetic artistry to view the human/animal/object body, she pushes us to reflect on the established rules of our contemporary society. Her artworks bring constructive looks and push forward the evolution of contemporary society, in particular Algerian society. She graduated with a Master of Theory and practice of contemporary art and new media from University Paris 8 (2009, France) and a DESA graphic design obtained at the Superior School of Fine Arts in Algiers (2006, Algeria). Her work has been exhibited in biennials such as Lahore Biennale (2020), Venice Biennale in the first Algerian Pavilion (2019), BISO Sculpture Biennale Ouagadougou (2019), Cairo Biennale (2019), Dakar Biennale (2018), Lagos Biennale (2017), Lagos Photo Festival (2017), Casablanca Biennale (2016), Addis FotoFest (2014), Biennale BY14 Yakutsk Russia (2014), Pontevedra Biennale (2008) and shown in group exhibitions at museums such as MAXXI Museum Rome Italy, MUSAC Leon Spain, CAAM Las Palmas in Canaries Islands, Torrance Art Museum California USA; at Galleries as Primo Marella Gallery, PasaJist Gallery, Pink Gallery, Vovatanya Gallery, Photon Center for Contemporary Photography, Artos Foundation, TAC, and video programs at French Institute in Dakar, Casablanca, Algiers, Stockholm, Leonardo Palazzo darte contemporano. She was grantholder in residency at Konstnärsnämnden with iaspis, The International Artists Studio Program in Stockholm (2020, Sweden), the Bag Factory in Johannesburg (2019, South Africa), Cité Internationale des arts in Paris (2014, France), Cinematheque Tangier (2013, Morocco), Videochroniques Aflam in Marseille (2010, France), Fondation Michelangelo Pistoletto in Bari (2008, Italy). She was awarded the prize Varenne FIGRA France in 2013 with a special motion for her performances Take your place during the webdocumentary A Summer in Algiers (2012, Algeria). Her artworks have been included in public and private collections at Markk Museum (Hamburg, Germany), Etnografiska Museet (Stockholm, Sweden), Fondation Donwahi (Abidjan, Ivory Coast), FRAC Occitanie Fond Régional D’Art Contemporain, Les Abattoirs (Toulouse, France), African Artists for Development (Paris, France).

Archaeology of The Colonized Body

Amina Zoubir’s work focuses on the representation and appropriation of the female body in colonially and ethnographically influenced photographs from North Africa. The MARKK’s photo collection contains many of these photographs, which are a challenging collection for the museum as well. As historical objects and testimonies, the museum stores and preserves them. However, their origin coincides with a time of colonial and scientifically European-dominated power structures and imbalances, which are directly visible in the photographic representations of people and the images they create. By non-critical reproduction, exhibition and viewing, there is still a danger today of both solidifying these images as well as a continued, violent objectification of the people depicted. In contrast, the strength of Amina Zoubir’s work lies precisely in the fact that, through a deliberate deconstruction and refocusing of these difficult portraits and the images they convey, the people depicted are placed at eye level as subjects, in a break with their historical context of origin, thus made and kept visible in a new way. The serial, collage-like reproduction highlights the extremely high number of women affected by this colonial appropriation of their bodies. 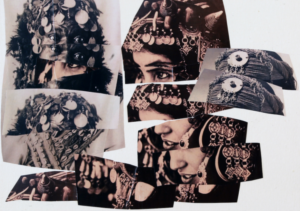 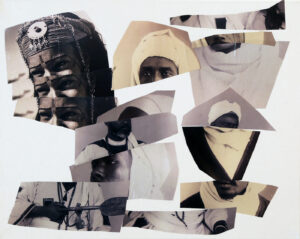 Read more on Contemporary And (C&)