Lenka Đorojević & Matej Stupica is an artistic duo based in Ljubljana, working together since 2012. With their collaborations, they develop a body of works that oscillate between interactive installation ambiences, set designs and experiential environments. For their work they received OHO Award 2015.

Neuromat is a series of twelve identical situations displaying the average generic workplace of the cognitive precariat, whose labour is deeply rooted in the absurdly static environment of communication capitalism. Unconscious gestures, dictated by information technology are triggering ideological operations in space-time medium, in which time is increasingly limited and space progressively diffused.

The authors (in close collaboration with electrical engineers Simon Bergoč and Boris Košak and artists Neža Jurman and Staš Vrenko) have chafed this fantasia of the abundance of knowledge and information to its essence – to the absurd, whose desire due to its inability to achieve gratification is bent upon destruction. The installation mechanism is set on partly self-destructing the installation, manifesting the fragmented and disruptive results of the overproduction.

All twelve situations are linked into a central network, that triggers the hammers punching on these clones. The central operating system of the installation works as an online environment connecting all twelve units together. Visitors are likened to the roles of operators, who are unable to control their actions, for every keystroke denotes destruction. The only means of resistance and transformation of the inert overproduction and operation is a radical withdrawal from the system and absolute inaction. 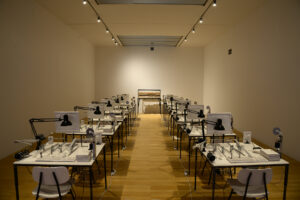 Neuromat, Moderna Galerija, Ljubljana, at the 8th Triennial of Contemporary Art U3, 2016. Courtesy of the artists. 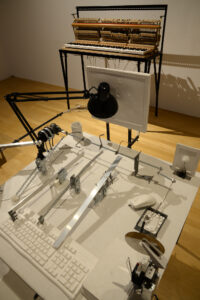 Neuromat, Moderna Galerija, Ljubljana, at the 8th Triennial of Contemporary Art U3, 2016. Courtesy of the artists. detail

Neuromat is a space expressing the antagonisms produced by technologically enriched human beings. The new era of cultural history isn’t marked with the antonyms between social stigmatization and individual autonomy. One should no longer analyse culture, identity and technology through the perspective of opposites between binary duals, such as public and private, object and subject, human and machine, for the use of technology and the multilateral, multi-directional, constant entanglement between the man and the machine doesn’t permit thoughts about opposing social forces, such as individual freedom in opposite to automated alienation.