Lerato Shadi, born in Mahikeng, South Africa in 1979 , lives and works in Berlin. She studied Art at the University of Johannesburg. Her practice investigates the politics of the body, the female body, the body of the South African-black woman. In her work, Lerato Shadi deals with themes of institutional violence, patriarchal and colonial strategies of exclusion and erasure, and resistance through subjective narratives. She works with various media such as drawing, performance and video.

The works of Lerato Shadi revolve around violence, a centuries-old story of violence, contempt, and disenfranchisement that no recorded history testifies to, because those who experienced it were not the people who wrote this history. It’s not about women’s rights and struggles and white feminism, but rather the obliterated life paths of Black women whose voices were silenced, who were never able to bear witness. It’s about Black feminism. Her work in the ifa-Galerie Berlin addresses institutional systems of inclusion and exclusion. By carving into its walls the sentence “Who is ‘not’ included in the structures of this institution,” she launches a physical attack on the institution. The title of her work: Batho Ba Ha Ba Tlhaloganye is written – as all her work titles – in Setswana, her mother tongue. It is not translated, as it addresses people who probably will not even hear the question of the work itself in this institutional space.

Created in the framework of the artistic research and exchange project Seeds For Future Memories, a cooperation between the artist residencies Thread in Sinthian, Senegal and Villa Romana in Florence, Italy, in 2018.
www.seedsforfuturememories.com 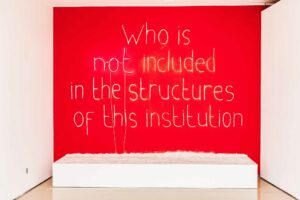 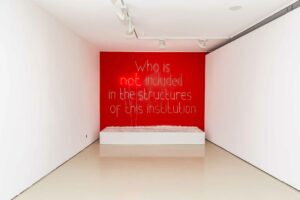 Mosi ke o ne… focusses erasure and deals with the question of whether it is possible to restore what has been lost, essentially questioning if it is possible to reverse time. Can lost knowledge be reclaimed? Can time be reversed? Is it necessary to reverse time? The video connects a recovery of a lost history to the recovery of a personal self. The digging up of bones, treasures and a restorative fire. The video taps into a well-established visual archive of using a book to signify knowledge and fire to signify destruction. 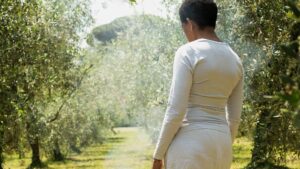