Milo Rau, born in Bern in 1977, studied Sociology, German and Romance studies in Zurich, Berlin and Paris under Pierre Bourdieu and Tzvetan Todorov, among others. Since 2002 he has created more than fifty plays, films, books and actions which have been shown at all the major international festivals, including Theatertreffen Berlin, Festival d’Avignon, Biennale Teatro di Venezia, Wiener Festwochen and Kunstenfestival Brussels. They have toured over 30 countries worldwide.

In 2007 Milo Rau founded the International Institute of Political Murder (IIPM) for the creation and international utilisation of his theatre productions, actions and films. It is based in Switzerland and Germany.
http://international-institute.de/

For more than twenty years an inexplicable Civil War is turning a territory as big as Western Europe into hell on earth. Triggered by the Rwandan genocide in 1994, the Congo War, also called the Third World War, has claimed six million lives. Many observers not only see in it a fight about political predominance in Central Africa, but also one of the most decisive economic battles for the share in the era of globalization. The reasons for the continuance of this war are no longer based on ethnic differences, but rather on raw materials for technology, which are essential for the 21st century. Nowhere else in the world are the superposition of global interests of the great national economies, local power claims, the colonial past and the post-colonial present more exemplary than in this crisis region.

Milo Rau’s The Congo Tribunal examines the causes and backgrounds to this – so far the biggest and bloodiest economic war in human history – in a unique and stunning transmedia art project. For the first time in national history, the Congo Tribunal brought together victims, perpetrators, witnesses and analysts of the Congo War in Bukavu/Eastern Congo and one month later in Berlin for a large, three-day civil tribunal. Presided over by a half-Congolese and half-international panel of experts, the Congo Tribunal created a humanly harrowing, profound analytic tableau. As a reaction to the passivity of the international community to the systematic attacks against the civil population, it was designed to counteract the decades of impunity in the region.

During the tribunal and in the central areas of conflict, remote villages and inaccessible mines, the documentary film The Congo Tribunal paints an unveiled portrait exposing this vast economic war. A film about conflict on a global scale, not about winning or losing but rather about the value of first world wealth and the question of how long we are willing to participate in this well-intentioned genocide. 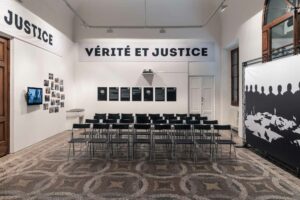 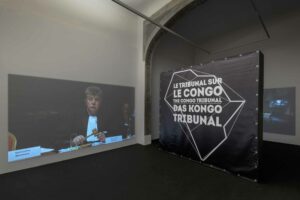 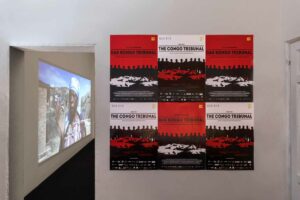