Skip to content
← The Broken Archive
Ramzy Zahoual: Handpicked WrecksIn the shade of the mosque

Ramzy Zahoual, born in 1984, is an Algerian photographer, based in Morocco. His works focus on memories and the ephemeral in suburban spaces. He explores the topographies of human-altered landscapes and captures the traces of what has disappeared, of remains of the people who inhabited a space in the past. In 2017 his work has been part of the Deuxième Biennale des Photographes du Monde Arabe Contemporain.

This series is a photographic etude on invading spaces and how uncanny harmonies can emerge from unusual combinations. It often happens that something ordinary – or even ugly, like an abandoned wreck – is aesthetically unappealing at first glance, although when we look at it from a wider perspective, our view may change. Wrecks mark and sublimate fragments of abandoned suburban visions. They point to the dysfunction of a chaotic society. 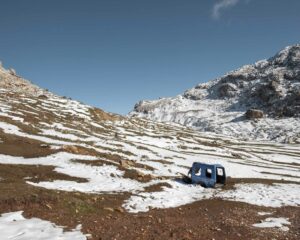 Look at me, 2013, from the series Handpicked Wrecks, photo print, Algeria 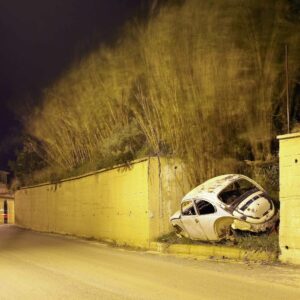 A car in a wall, 2011, from the series Handpicked Wrecks, photo print, Algeria 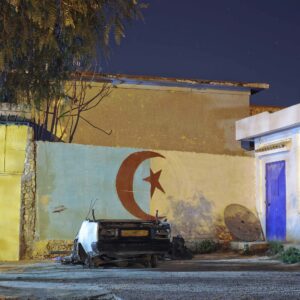 In the shade of the mosque

created during the artist’s residency at Common SpacesABC

In the middle of what apparently was a small district that had been destroyed for unkown reasons, this misery hut was standing in the very middle, in front of me, i could not help it but being intrigued by all those writings, flags and signs calling me. Later I undertood that there was a whole familly living here, lead by a great guy called Abdelmajid. Usually my works rarely show human being, as I want to show the alteration of the man, but this time and particularly due to the potential ephemerality of the subject, i wanted to point out, in my way, what was happening there. It is as if the roots of the mosque had drawn on the energy of the neighboring soil to rise to this height, killing some surrounding plants, as well as the potential fruits. This district remains a grey space, devoid of function, adjoining an old funfair, an aquatic museum closed at the end of the 80s and some anarchic buildings. For me, it is an intimate work on the memory of a place, that ended having me several months later in a foggy october in front the same view, emptied of what used to be a refuge, sheltering a man and his familly that just wanted a place to live requesting a look from the authorities of the kingdom. (R.Z.) 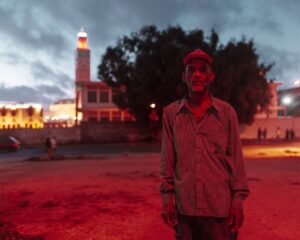 Abdelmadjid, from the series In the shade of the mosque, 2016 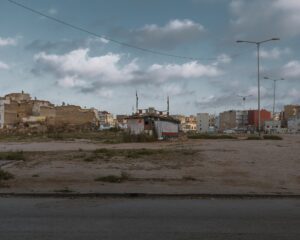 Front view, from the series In the shade of the mosque, 2016 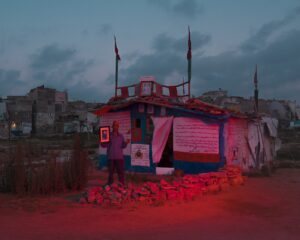 The man and his house, from the series In the shade of the mosque, 2016 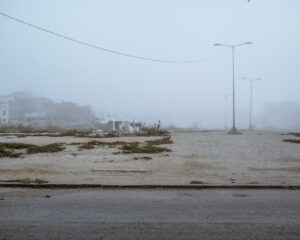 They were no longer there, Casablanca, 2017