Essay
First published in When The Library Was Stolen, on the Private Archive of Abd Al-Rahman Munif , Fehras Publishing Practices, 2017

The world of Arabic publishing, comprising various national and regional markets, is organized according to dynamics of hegemony and dependence so that the countries of the Maghreb depend on publishing in the Arab East, which in turn dominates the markets of the former. The markets of the Arab East, meanwhile, remain practically impenetrable, accessible to publishers in the Maghreb only through collaborations with their counterparts in the Arab East. If we consider the numbers, the Arab East boasts a much greater number of publishers compared to the Maghreb. What distinguishes Arabic publishing from the industry in the West is that, on the one hand, there is no major capitalistic drive and, on the other, there are many small-scale publishing houses. Only a handful of publishers, from Morocco to Kuwait, manage to cover the entirety of the Arab, or Islamic, market. Moreover, there are only a few big distribution companies that cover the entire Arab region, a fact which further limits the visibility and exposure of many publications. F.M. 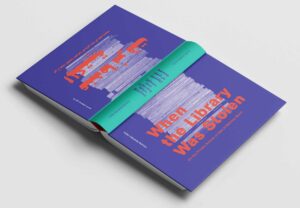 Franck Mermier is an anthropologist and researcher of urban communities, as well as of cultural production in the Arab region. Mermier is the former director of the Centre français d’étude yéménites in Sanaa and former Director of Sciences int the department of Modern Studies at the Institut français du Proche Orient, Beirut. He is currently working as a research director at the Centre National de la Recherche Scientifique in Paris. In Arabic, he has published Al-Kitab wa Al-Madinah: Beirut wa Al-Nashr Al-Arabi (Books and the City: Beirut and Arab Publishing, 2006) – with Dar Al-Mukhtarat (Selections Press) and Mudun Mutanazaaeh, Beirut Sanaa Beirut wa Aden Beirut (Contested Cities: Sanaa’s Beirut, Beirut’s Aden, 2015) – with Dar Al-Furat (Euphrates Books). In French, he has published Regards sur l’édition dans le monde arabe with Charif Majdalani (Editions Karthala, 2016).

When the Library was Stolen, 2017
Manage Cookie Consent
We use cookies to optimise our website and service.
Manage options Manage services Manage vendors Read more about these purposes
View preferences
{title} {title} {title}