Light, space, and gravity are major components in this work. The fears and hopes of so many people hang and glide within the constructed floating space. An essence of the ongoing destruction of Gaza and the recurrent planning for its reconstruction. The work is also a lurking future of an ongoing possible destruction hiding behind every wall in Palestine. The audience is invited to look through a porthole at an installation behind the white walls of the gallery space of simulated bricks hanging in vacuum. 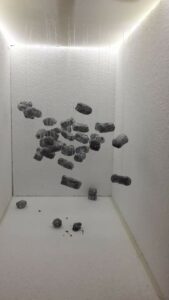 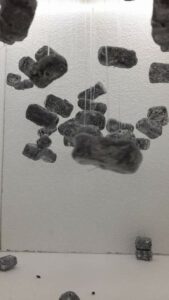 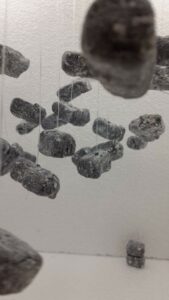 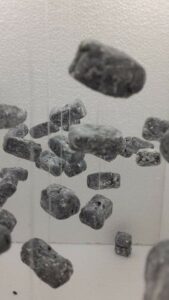 Dalia Boukhari was born in 1986 in Kuwait. Having grown up among artists, Dalia began drawing and painting from an early age. She received her education in Graphic Design in Ramallah 2006, Palestine. As a designer Dalia’s practice began in 2004 and has since stretched across the world of design from product design to advertising and to printed matter. She also works with the media of painting and video, exploring both to develop her own visual grammar. Dalia obtained her bachelor degree in contemporary visual art in 2018 from the International Art Academy of Palestine in Ramallah where she lives and works.