The Sun and the Sunflowers

“In this video I was interested in collective memories and personal fears, how they suddenly appear and block our vision and prevent us from being in the moment and how we return to the moment, to ourselves when they dissappear. The one with the sunflowers is about my childhood fear of being swallowed by a shark, namely by a beloved one, as I later – as an adult – found out.

In the other video, during the dawn, I remembered the ship accident that took place in the Bosphorus, Istanbul in 1979, when I was 4 years old. The Romanian ship Independenta collided with a Greek freighter which caused an immense noise, broke the glass of the windows and brought clouds of fire. My personal fears were as horrifying as this apocalyptic day. As a child unconsciously I integrated that day into my personal fears and had an almost dreamlike, hallucinating memory that I could not even explain to myself. ” (A.S.) 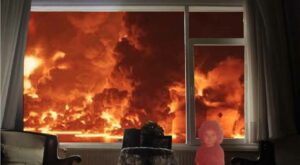 The Sun and the Sunflowers, 2016, 2 channel video, each 1 Minute with sound, still
memory, children

Asli Sungu, born in Turkey in 1975, spans in her practice from video to installations. Her work focuses on private stories, which are often humorous or idiosyncratic but the resonance is something we can all identify with. She explores daily themes that highlight much larger power structures and meanings. She has exhibited her work internationally, including Künstlerhaus Bethanien in Berlin (2013), Istanbul Modern Museum (2014), Bundeskunsthalle in Bonn (2014) and the Changwon Sculpture Biennale, Korea (2018). She currently lives and works in Berlin.

The Sun and the Sunflowers, 2016, 2 channel video, each 1 Minute with sound, still
Manage Cookie Consent
We use cookies to optimise our website and service.
Manage options Manage services Manage vendors Read more about these purposes
View preferences
{title} {title} {title}