Skip to content
← The Broken Archive
Yasmina Reggad: We dreamt of utopia and we woke up screamingAgainst All Odds/Présent Composé

Yasmina Reggad is an independent curator, writer and performance artist based in Brussels, Belgium. She holds an MA in Medieval History from the Sorbonne University. She co-funded and is currently the curator of aria, the artist residency in Algiers. She previously worked at the Delfina Foundation and Art Dubai Projects. Reggad is the co-curator of the French Pavilion at the 59th Venice Biennale, represented by artist Zineb Sedira. Her research and projects focus on the politics of futurity, investigate alternative systems of knowledge and artistic modes of production, and explore performative methodologies inspired by dance and performance notations.

We dreamt of utopia and we woke up screaming

Against the backdrop of the Cold War’s bi-polar tensions during the 1960s and 1970s, militants from all the continents convened in Algiers and witnessed a forging of a ‘third way’, other possible futures. The Algerian capital hosted everyone from national liberation movements, political exiles, rebels and disillusioned Westerners. Drawing on the liberation movements’ broadcasts aired by the Algerian national broadcasting company (RTA), the polyglot and polyphonic productions echo Yasmina Reggad’s journey through the worlds of ideas and ideals of that transformative period.

Initiated back in 2016, the long-term research we dreamt of utopia and we woke up screaming (named after writer Roberto Bolaño’s ‘First Infrarealist Manifesto’) takes on different forms and unfolds with each episode in the fashion of a radio series. A broadcasting company at times, and a foreign broadcast monitoring centre at others, the first two episodes explore new ways of ‘exhibiting’ and activating a unique and little-known archive of a time when Algiers was dubbed the ‘Mecca of Revolution’. By either immersing themselves within a live radio documentary show, or by activating a performative installation, the audience bares witness to the processes of conception, production and broadcasting of two carefully scripted works. The audience becomes both the contemporary listener and broadcaster. They carry the voices of past struggles and avant-garde propositions. In this way, they are invited to re-enact the solidarity with and between otherwise invisible actors of global history.

The performance Episode 1. La radio des images qui s’écoutent is inspired by the radio and documentary theatre genres. Spanning across all continents and several languages, a diverse corpus of both audiovisual and documentary archive elements and contemporary documents intertwine with testimonies by key actors and militant voices of the 1960s and 1970s. The performance provokes an encounter between voices of the past, Frantz Fanon, Houari Boumediene, Sam Nujoma, María Acerina, Elaine Mokhtefi, Antonio Cubillo, Vera Sílvia Araújo de Magalhães, Manuel Alegre or Yasser Arafat, and the voices of the present: a solidarity choir composed of today’s activists. Through the unfolding of the carefully crafted acoustic and dramatised script, the audience is led into an active form of listening constantly brought back to present and current events by the voice of the main commentator, Yasmina Reggad. 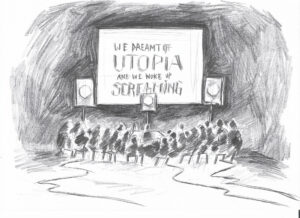 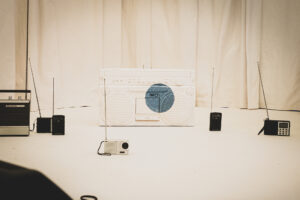 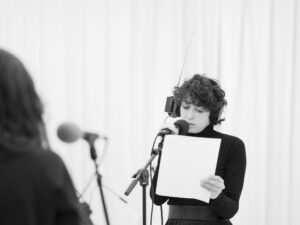 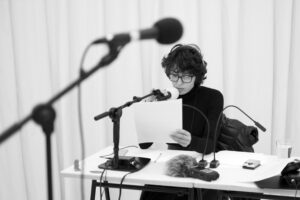 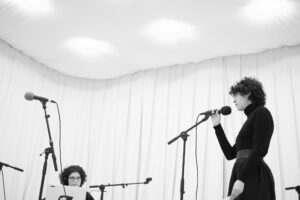 Ismaël had wanted to be a film director since an early age. Facing the lack of access to equipment, writing appeared to be the only way for him to enter cinema. Throughout the years, Ismaël has compulsively written many screenplays. He seriously intended to turn two of them into feature films, but failed in one case before and in the other too soon after he’d starting shooting. Moreover, this routine immersion into the writing of stories was interrupted when his inspiration ran dry during the three years he spent in Toulouse, France. While he was there, Ismaël was faced with the fact that he was unable to write a story that took place anywhere outside his home country, Tunisia….

Participating artists and curators: Anna Raimondo (curator and artist, Italy), Younes Baba Ali (artist, Morocco), Basak Senova (curator, Turkey), Simohamed Fettaka (artist, Morocco), Yasmina Reggad (curator, France), Ismael Leamsi (artist, Tunisia), Charlotte Bank (art historian and curator, Germany/Switzerland), Younes Atbane (artist, Morocco), Nora Razian (curator, Lebanon),  Atef Berredjem (artist, Algeria). They met for a two-week residency to create a dialogue about artistic approaches to the question: “Where are we now?”. That question – central to the Marrakech Biennale in 2014 – prompted collaborative reflections focusing on the artist’s creative process as well as on the curator’s more theoretical reading of it. The conversations and themes of the residency finally took material form in a book: each artist/curator pair produced an essay evoking the key themes addressed during the residency. The first book launch took place in Marrakech in February 2014, during the Marrakech Biennale.