Conversation
First published in: On One Side of the Same Water. Artistic Practices between Tirana and Tangier, Hatje Cantz, Ostfildern, 2012

In 2003 the Cinematheque de Tanger was established when a group of artists and film professionals led by Yto Barrada formed a non-profit association to take over the lease of the faltering Cinema Rif, which was established in 1938 and is situated on the Grand Sacco, the main plaza of Tangier. First published in Index, 2, Museu d’Art Contemporani de Barcelona (MACBA), 2011. 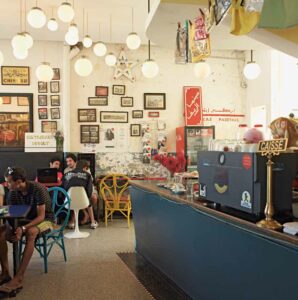 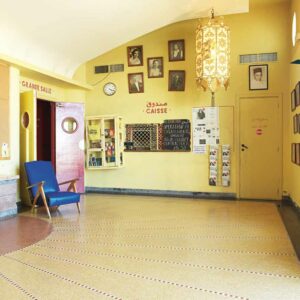 Marie Muracciole is a writer and curator based in Paris and Beirut. She became director of the Beirut Art Center in February 2014. She is also a professor of cinema and video theory at the École d’Enseignement Supérieur d’Art de Bordeaux (EBABX). She has curated numerous exhibitions including Yto Barrada’s Riffs at both the Deutsche Guggenheim, Berlin and the Renaissance Society, Chicago, US.

Yto Barrada was born in Paris in 1971 and is Moroccan, French. She studied history and political science at the Sorbonne and photography in New York. Her work — including photography, film, sculpture, prints and installations, — began by exploring the peculiar situation of her hometown Tangier. She is the artistic director and co-founder of the Cinematheque de Tanger in Morocco. Her work has been exhibited at Tate Modern (London), MoMA (New York), The Renaissance Society (Chicago), Witte de With (Rotterdam), Haus der Kunst (Munich), Centre Pompidou (Paris), Whitechapel Gallery (London), and at the Venice Biennale in 2007 and 2011.