The White Man Tomato and other Tales

“Sinthian. While walking with Abib I see a cucurbit which I’m familiar with: I know it as ‘patola’, a snake-shaped gourd popular among Bengalese in Italy, who are successfully growing it all over the peninsula. I also cultivate it, and reproduce its seeds. But now Abib says that it’s not a cucurbit: it’s a tomato. Its full name is “tomate tubaco”, where tubaco stands for white man. I’m intrigued by the incongruences around this vegetable. While in South Asia patola is eaten young and green, here they wait for the white-man-tomato to turn orange-red: at this stage of ripeness the pulp is toxic but the seeds, now fully mature and fertile, are wrapped within a red gel, sweet and nutrient, which was used as a substitute for tomatoes. It’s somehow associated with poverty. People can now afford canned tomatoes from Tambacounda and nobody eats this cucurbit anymore, which in the meantime turned wild again, twisting its tendrils with the local calabasses. Maybe my misplaced appearance in the village resembles the bright-red of white-man-tomato.

Other tales:
In her free time Fatima roves around the parks of Milano, collecting tree bark for medical uses. She knows the flora of the city better then a botanist. Ibra’s garden flourishes on the shores of Piave river: every summer Senegalese seeds develop into ripe fruits, nourished by the fertile soil of the Venetian plain, to produce food for the family (plus a little business) and seeds for the next year. A Senegalese-Venetian landscape was invented, while Chinese farmers grow unknown vegetables in the Florentine plain and Bengalese people around Rome and Palermo. The outcome of their work often ends in the same (very local) distribution chain: on the shelves of the mini-markets cultivars and denominations are constantly re-mixed. Mario’s garden borders with Yu Fen’s family farm: they observe each-other with curiosity, but at a certain distance. Yu Fen had to reinvent his rural knowledge out of the tabula rasa of migration, but the climate mutations turned Mario too into a foreigner, although he never moved from his village. Last year Mario gave me a dried “fish pumpkin” a calabash used by fisherman to keep their prey alive, “back then when the river was feeding the families”. According to him the gourd is originally from Morocco. He reproduced its seeds every year since 1954, now it is my turn to keep the tradition alive, he said. Some of them are now sprouting in Sinthian, some others in Palermo. I’m familiar with this variety since my grandmother, originally from Sicily, grew a very similar vegetable, named cucuzza, in a little garden outside Florence.” (L.C.)

The White Man Tomato and other Tales was created in the framework of the artistic research and exchange project Seeds For Future Memories, a cooperation between the artist residencies Thread in Sinthian, Senegal and Villa Romana in Florence, Italy, in 2018.
www.seedsforfuturememories.com 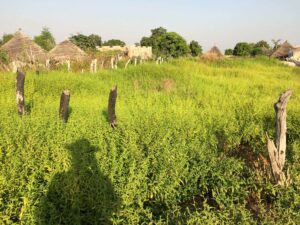 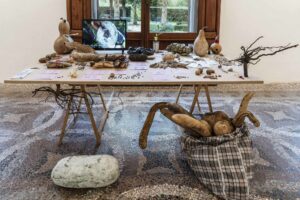 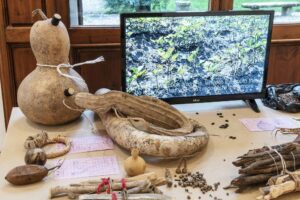 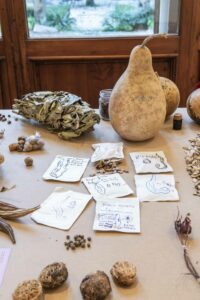